Freebie Friday: Our first week of no spend

Almost two weeks of no spend has gone down in this house. We were creatures of habit and actually spent rather a lot on 'extras' each month. Between popping into the shops after the nursery run and the late night snack trips, I think it's fair to say we easily spent most of our expendable income on unnecessary things. I was expecting these first two weeks to be really hard. When you're used to the habit of checking out the aisles of Co-op on your way home every day, it's hard to get out of it, but actually it's been pretty easy! I wonder whether that's more that it still feels like a novelty? I dunno, I guess we'll see as the weeks go on.

Now, we have to admit something before we get started. Lee spent money this week. Yes, I know, I was as gutted as you were. He's in a new job, and the 'lads' invited him to the cob van (sandwich van for those not from Derby), and he felt like he needed to go in order to create new friendship bonds / not looks like a loser / insert whatever excuse justifies the act here. I'm letting him off, especially because he sold 2 boxes of quail eggs in his first week at the new job and used that money so, fine, let's not make it a habit Lee, alright? Anyway, it needed to be said in the interest of keeping everything on the table.

This week I made full use of loyalty cards and freebies. Who knew there were so many free things out there within reach! A few years of spending had made sure that my loyalty cards were fully stocked up and ripe for harvesting.

First stop was coffee with a friend at Costa. It had been organised before 'no spend' officially started so, in the interest of sticking by what I say I'm going to do, I knew I would have to use my loyalty card in order to stick to not parting with any cash. I was surprised to see that I had £7.00 of Costa points on my card. Free coffee yes please! 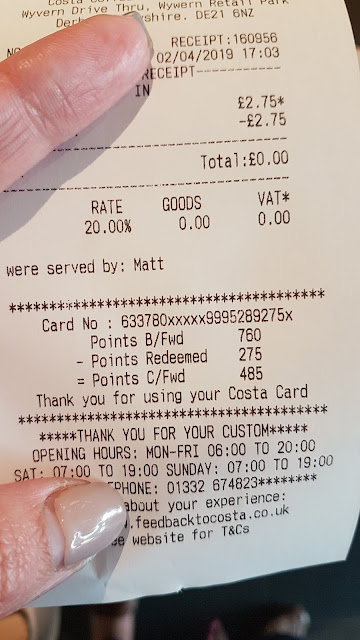 Subway is another bank of loyalty points that I didn't realise that I had. We have a little Subway that we pass on the walk to nursery and, upon discovering I had 900 points on there, I have found myself popping in occasionally for a cappuccino to drink on the walk home. At 100 points a pop it means I can have quite a few before my points run out. Nice!

Mcdonalds was a big one. Drive thru is an absolute killer for our finances, and with there being many days where we have an hour in between pick up times, I'll often find myself driving through for a drink whilst the kids nap in the back. Can't do that anymore. However, last month the monopoly stickers began and we won a few free food items! It's made this week easy in terms of transition, but future weeks I'm sure will be harder. I'll simply have to get more organised! 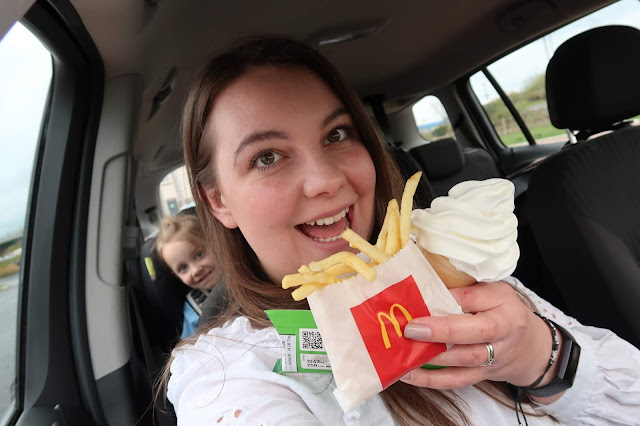 There are plenty of freebies out there without needing endless loyalty points though. A quick search on the trusty internet and I found a voucher for a free smoothie from my local Vibe Juice Bar. It's not a place I ever go, but who's gonna turn down a freebie! It was a lovely addition to the packed lunch Annie and I had just before her gymnastics class. 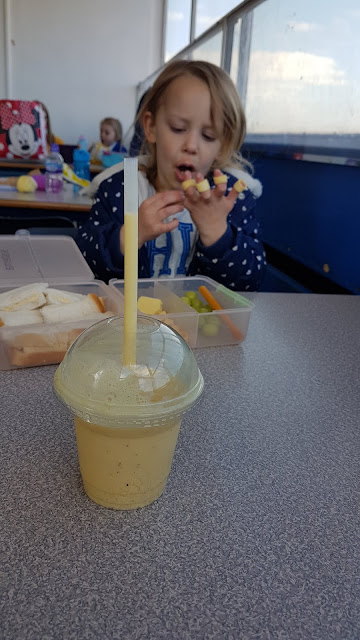 I've had to think forward this week and be really organised with planning. If I know we have a picnic coming up in the week or friends over for dinner, then I'll make sure I've arranged my food shop that week to include some special snacks and enough dinner items. That way we can still do those things but I'm not spending 'extra' having to pop out to get stuff. If I've forgotten to get something or it's a last minute addition to our week then, tough, I've got to make it up with what I've got in the house. So far that's not been too much of an issue, but tomorrow we have friends over and we're making the pudding part of the meal. It's got to be gluten free and vegetarian and I didn't buy extra ingredients in this week's shop. Could be interesting.

I even managed to get some flowers this week through a friend, Angela, who posted some spare plants on facebook (see, it's not all bad) that were free to a good home. I now have an assortment - and I say assortment because I have no idea what half of them are - in my front garden, making everything look a little more spring-like.

Of course, I can't end this post without mentioning two friends who pulled through in time of need. I've always said that ultimately it will be God looking after us during this time, cause there is only so much you can do on your own.

One friend, who I won't name because I've not checked whether I can or not, gave us a gift "towards food, bills, fun times etc". We've put it in the bank ready for the summer, cause that's probably going to be the hardest time as we have holidays already booked. Thank you. It was really lovely and unexpected.

Another friend, Todd, saw that my hairdryer had broken on Instagram stories (if you're not already following then you should - they are totes hilarious @holliethehousewife), and offered his. He even dropped it round for me. Again, thank you. I was gearing myself up to many fancy new hairstyles where I leave my hair to dry naturally in the sun, but now I don't have to and can enjoy the same hairstyle I've been rocking for my entire adult life.

It's been a fun first two weeks. What's nice is that I'm appreciating everything a little more at the moment. Knowing that I can't just readily have anything I happen to fancy, means that the little things are meaning a lot. It's actually brought so much more joy rather than the sadness and frustration I thought it might bring. It's early days, but I'm hoping this appreciation for all I do have continues throughout the next 6 months. Who knows, I might create some new habits through this that last a lifetime?